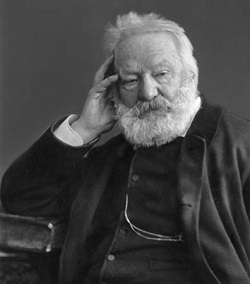 Victor Marie Hugo (26 February 1802 – 22 May 1885) is one of the titans of French Literature, as well a prominent politician and activist of the 19th century.

He is most well known for his epic novels Les Misérables and The Hunchback of Notre Dame, though he was also an accomplished playwright and poet, as his body of work can tell.

He witnessed all the revolutions France went through in the 19th century, which fuelled his sympathy for the common folk (showcased in Les Misérables) and hatred of autocracy. Initially a conservative royalist (his mother had been a devoted if secret supporter of the Bourbons during the First Republic and First Empire), he grew more radical over time. He served in several legislative or constitutional bodies, starting under the July Monarchy, in which Louis-Philippe created him Viscount Hugo, which came with the right to sit in the upper house; he was a consistently conservative-liberal voice in the Chamber of Peers.

After the Revolution of 1848, he was elected as a conservative to the National Assembly under the Second Republic, though he found himself quickly moving left, and ended up being among those delegates who denounced Napoleon III's 1851 move to establish the Second Empire. Loud in his loathing of that new imperial regime, he was exiled to the Channel Islands for some time. However, he returned after the Franco-Prussian War ended the Second Empire, and sat first in the National Assembly and then in the Senate of the Third Republic until his death.

Hugo's most famous political causes included the reduction of poverty and better education for the masses, as well as advocacy for the abolition of death penalty (which eventually happened in France just a little under a century after his passing). He was also an advocate for copyright and successfully lobbied for the Berne Convention (still today, the main treaty governing copyright internationally) as founder and honorary president of the Association Littéraire et Artistique Internationale.

Works by Victor Hugo with their own trope pages include:

Other works by Victor Hugo provide examples of: