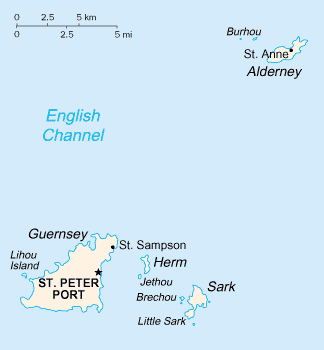 Guernsey (Guernésiais: Guernési; French: Guernesey), officially the Bailiwick of Guernsey (Guernésiais: Bailliage dé Guernési; French: Bailliage de Guernesey), is a British Crown Dependency in Western Europe formed from the island of Guernsey itself as well as the separate jurisdictions of Alderney and Sark. It is one of The Channel Islands, located just northwest of the French departement of Normandy, with St. Peter Port being the capital and largest city of the territory. The territory is not part of the United Kingdom, although defence and most foreign relations are handled by the British Government.

The name "Guernsey", as well as that of neighbouring "Jersey", is of Old Norse origin. The second element of each word, "-ey", is the Old Norse for "island", while the original root, "guern(s)", is of uncertain origin and meaning, possibly deriving from either a personal name such as Grani or Warinn, or from gron, meaning pine tree. Like Jersey, the territory was a former part of Duchy of Normandy, and remained under English control after Philip II of France took the rest of the Duchy over and Normandy became part of France, eventually being recognized as part of Henry III's territories in the 1259 Treaty of Paris. The island was also taken over by Germany during World War II from 30 June 1940 until the 9 May 1945, and was very heavily fortified by the Germans, with remnants of the defences still existing to this day.

Guernsey is known for its cows, which are prized worldwide for their rich creamy milk which is claimed to hold health benefits over milk from other breeds, as well as their distinctively flavoured and rich yellowy-fatted beef and distinctive yellow butter. Guernsey is also a popular offshore finance centre for private equity funds because of its light tax and death duties.

Notable Jersey natives or inhabitants include: 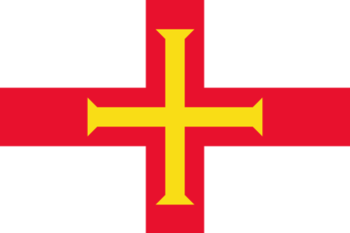