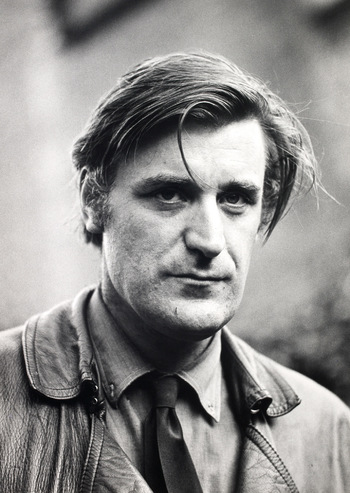 Hughes met Plath in 1956 at a party while both were attending Cambridge - they married four months later. Hughes had two children with Plath - Frieda and Nicholas. In 1961, Hughes began an affair with another woman, Assia Wevill, and Plath and Hughes separated in 1962. After Plath died of suicide in February 1963, Hughes became the executor of her literary estate.

Because his infidelity and Sylvia Plath's downward spiral into depression occurred around the same time (and probably had some overlap, as well), fans of Plath aren't often fans of Hughes. There's also some controversy over how he handled her personal effects (in particular her journals) and manuscripts.

It's easy to forget when you read about his personal life that Hughes was and is a widely regarded and critically acclaimed English poet, playwright, and translator.

Tropes in Hughes's works include: