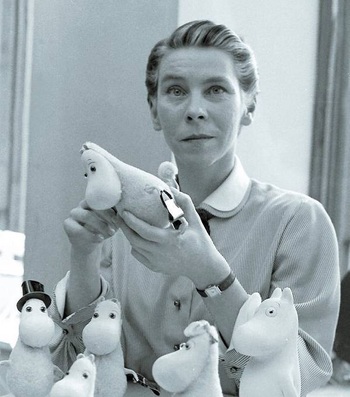 Jansson with her most famous creations.
Advertisement:

Tove Jansson (9 August 1914 – 27 June 2001) was a Swedish-speaking Finnish author, novelist, painter, illustrator and comic strip author. She is most well known as the creator of The Moomins.

Jansson was born in Helsinki to artist parents Viktor Jansson, a sculptor, and Signe Hammarsten-Jansson, a graphic designer and illustrator. She had two younger brothers, Per Olov and Lars, who became a photographer and an author and cartoonist, respectively. Whilst their home was in Helsinki, the family spent many of their summers in a rented cottage on an island near Borgå, 50 km east of the capital. At age 14, Jansson wrote and illustrated her first picture book Sara och Pelle och näckens bläckfiskar (Sara and Pelle and Neptune's Children). It was not published until 1933. She also sold drawings that were published in magazines in the 1920s.

Jansson studied at University College of Arts, Crafts and Design, in Stockholm in 1930–33, the Graphic School of the Finnish Academy of Fine Arts in 1933–1937, and finally at L'École d'Adrien Holy and L'École des Beaux-Arts in Paris in 1938. She displayed a number of artworks in exhibitions during the 30s and early 40s, and her first solo exhibition was held in 1943. She worked as an illustrator and cartoonist for the Swedish-language satirical magazine Garm from the 1930s to 1953.

She wrote and illustrated her first Moomin book, The Moomins and the Great Flood, in 1945, during World War II. She said later that the war had depressed her, and she had wanted to write something naïve and innocent. This first book was hardly noticed, but the next Moomin books, Comet in Moominland (1946) and Finn Family Moomintroll (1948), sold well and brought her fame. She went on to write and publish six more Moomin books, as well as a number of picture books and comic strips. Her fame spread quickly and she became Finland's most widely read author abroad. For her "lasting contribution to children's literature", in 1966 Jansson received the biennial, international Hans Christian Andersen Award for Writing. She continued painting and writing for the rest of her life, although her contributions to the Moomin series became rare after 1970.

As well as her Moomin works, Jansson also wrote novels and short stories. Her first foray outside children's literature was Bildhuggarens dotter (Sculptor's Daughter), a semi-autobiographical novel published in 1968. After that, she wrote five more novels, including Sommarboken (The Summer Book) and five collections of short stories.

She was briefly engaged in the 1940s to politician Atos Wirtanen, but they never married and instead remained close friends. During her later studies, Jansson met her future partner, Tuulikki Pietilä. The two women collaborated on many works and projects, including a model of the Moominhouse, in collaboration with Pentti Eistola. They remained together for the rest of Tove's life.

Jansson died on 27 June 2001 from cancer, at the age of 86. She was buried beside her parents and younger brother Lars in the Hietaniemi Cemetery in Helsinki.