Spoilers for this film and all preceding Sakura Wars works will be left unmarked. You Have Been Warned! 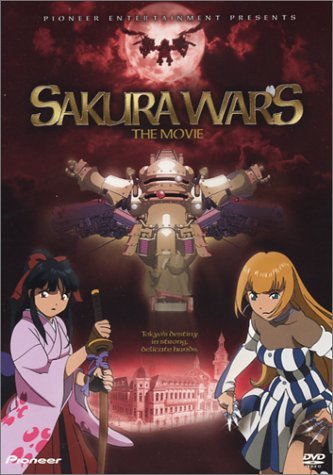 "It's our duty to protect this great city!"
"Let's raise the curtains now."
—Patrick Hamilton
Advertisement:

Picking up one month after the events of Sakura Wars 3: Is Paris Burning?, Ichirō Ōgami (Akio Suyama) has just left Paris and New York City actress Ratchet Altair (Akiko Kuno) is dispatched join to the Imperial Combat Revue's Flower Division in Tokyo, so that she would go on to found the New York Combat Revue, which would later be seen in Sakura Wars: So Long, My Love. But darkness comes as the American company, Douglas-Stewart, under the leadership of Brent Furlong (Kōichi Yamadera), unveils a plan to make the division obsolete by using Japhkiels, which are supposed to be unmanned mechs. Soon, the Flower Division and Ratchet are drawn into the heart of Douglas-Stewart's plans.

Like the episodes of the TV series, the film is also a self-contained story in the same continuity (no Alternate Continuity here, thankfully) and leaves no hanging plot threads behind; such as Ratchet being introduced here, and eventually goes on to appear in Sakura Wars: So Long, My Love. The movie does assume you have familiarity with the characters and game timeline (providing no explanation as to why Ogami isn't even present for almost the entire movie, expect being mentioned about being in Paris, where Is Paris Burning? takes place). The movie also substantially expands the world of Sakura Wars beyond Japan, exploring in greater depth the dynamics of the prototype team (which consisted of Ratchet, Orihime, and Leni) fielded in wartime Europe. A recent production, it makes extensive use of CGI effects, particularly for the Kobu-Kais.

Sakura Wars: The Movie is also the final entry in the series to feature Kōichi Kitamura as the voice of Yoritsune Hanakōji before he died in 2007.

Originally licensed by Pioneer Entertainment, the film is now licensed by Funimation, and was released on Blu-Ray on October 22, 2013.