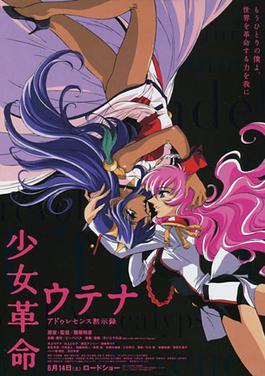 The film is an Alternate Continuity that changes most of the show's characters in drastic ways, both in terms of appearance and characterization. The storyline receives just as many drastic alterations; though containing recognizably similar beats, it could be considered more of a reimagining of the series than an adaptation. In contrast to the show's subtle approach, the film makes explicit the romantic nature of Utena and Anthy's relationship.

Although the movie is separate from the original series in a literal sense, it is in many ways a spiritual continuation/alternate ending due to its heavy use of symbolism that requires knowledge of the original show to parse. The movie also picks up where the series left in escalating the metaphorical storytelling and surreal imagery to ever-higher levels of Mind Screw.

Adolescence of Utena was also adapted into a manga by Chiho Saito, who also did the manga version of the original Utena storyline. It tells a similar plot in a much more straightforward fashion across a single volume.

Due to the film relying heavily on expectations from the series and its own barely-explainable nature all spoilers will be left unmarked.