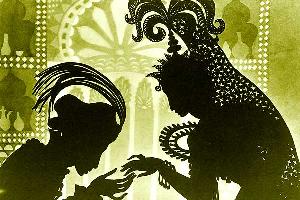 from 1917; however, Cristiani's entire filmography was rendered permanently lost after a series of vault fires between 1918 and 1961, leaving The Adventures of Prince Achmed the earliest feature-length animated film to still be viewable by the modern public.

Based on legends from The Arabian Nights, it tells the story of the travels of Prince Achmed, who is tricked by an evil magician into riding a flying horse that takes him to distant magical lands. He falls in love with (and kidnaps) Princess Pari Banu, and must fight to return home with her in time to stop his sister, Princess Dinarsade, from marrying the evil magician. Dinarsade's former husband Aladdin (of the magic lamp fame) and a helpful witch who is the magician's arch nemesis join him on his quest.

In addition to its age, the film is most notable for Reiniger’s highly unique animation style, which uses black silhouettes of the characters and set pieces against painted backdrops. While this might be perceived as limiting, the characters remain highly distinct and expressive. Each silhouetted figure in the film was hand-cut and animated by Reiniger frame by frame – a labor of love that took three years to complete.

The Adventures of Prince Achmed provides examples of: