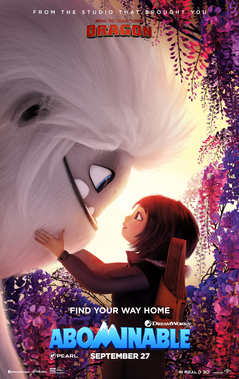 Abominable is a 2019 animated film produced by DreamWorks Animation and Pearl Studio that revolves around a young girl helping a young Yeti return to his home. It was released in the U.S. on September 27, 2019, though it was released in Australia and a few other countries on the 19th.

A spinoff television series, Abominable And The Invisible City is scheduled to premiere on Peacock and Hulu on October 5, 2022, with much of the voice cast from the film set to return.

No relation to the book series with the same name, nor does it have anything to do with the 2006 movie.