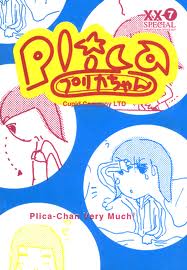 Plica is a (technically) Yonkoma (though it's frequently more than four panels) Slice of Life manga by Sae Amamiya about lesbians in Japan, which was serialized from 1996 to 2007 (first in the josei lesbian magazine Anise, and then online). There is also a movie. While sometimes categorized as Girls' Love, it's more of a mature and realistic take on things than Girls Love usually entails.

At first the strip focused solely on the eponymous Plica and her girlfriend Mari, but eventually the recurring cast expanded to include cool, snarky teacher Saki and her emotionally-distant on-again-off-again girlfriend Rui; Roku, who seems to only fall for women who are taken (usually by men), and hopelessly frumpy, perpetually single Machiko. Together they... live their daily lives while making observations about love, sex and brushing one's teeth in the bathtub.