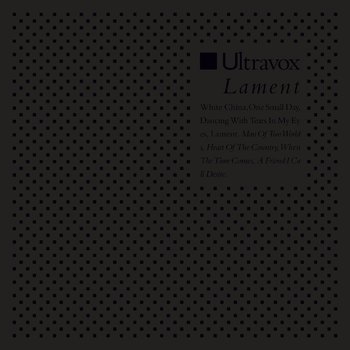 "One day, where I didn't die a thousand times..."
Lament, released in 1984, is the seventh album by British New Wave Music band Ultravox. Their last with drummer Warren Cann, who would be replaced with Big Country member Mark Brzezicki two years later, it continues the shift away from the more complex brand of new wave that Vienna and Rage in Eden championed. Rather than upping the Synth-Pop elements of Quartet, however, the album instead added in elements of Arena Rock such as heavier use of guitar and stadium-esque reverb. This shift would end up foretelling the overtly pop rock direction of both U-Vox and the band's 90's output.
Advertisement:

Lament was also one of the first albums to take advantage of the technological advancements of the then-nascent Compact Disc format, interspersing several remixes with the album's songs to prolong its length and offer consumers with an incentive to try out those shiny plastic discs. This expanded tracklist was also included on the cassette release (minus the Special Mix of "White China"), as the Compact Cassette format at the time had already started to become known as an outlet for extended versions of albums.

The album was yet another success for Ultravox, peaking at No. 8 on the UK Albums chart and being certified gold by the British Phonographic Industry. In the US, however, it was not as big of a success as Quartet was, peaking at just No. 115 on the Billboard charts. Lament spawned four singles: "One Small Day", "Dancing with Tears in My Eyes", "Lament", and "Heart of the Country".

* = omitted from LP releases
† = exclusive to the CD release

Weeping for the memory of a trope gone by: