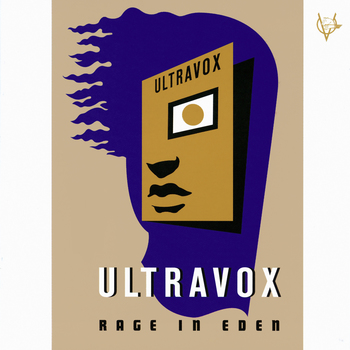 "The screenplay calls a message for the nation."
Advertisement:

Rage in Eden, released in 1981, is the fifth album by British band Ultravox. The album is a continuation of the artsy New Wave Music style developed on Systems of Romance and especially Vienna, though with a more focused direction compared to the Genre Roulette of the latter. Production of the album was a much rockier affair than Vienna as well, taking over three months to record compared to the mere three weeks of its predecessor, owed largely to the lack of sufficient live performances to test out the material that would be included on the record. Consequently, the band would move away from working with Plank during the production of Quartet, which would instead be produced by former Beatles producer George Martin.

Despite the band's reservations about its potential sales, being worried that Vienna would be too much of a Tough Act to Follow, Rage in Eden was another commercial success; while not as strong-selling as Vienna, it peaked at No. 4 on the UK Albums chart and was certified gold by the British Phonographic Industry. The album would also be certified gold in New Zealand. In the United States meanwhile, the album peaked at a far quieter No. 144 on the Billboard 200.

The album produced two singles: "The Thin Wall" and "The Voice".

Native these tropes speak to me: