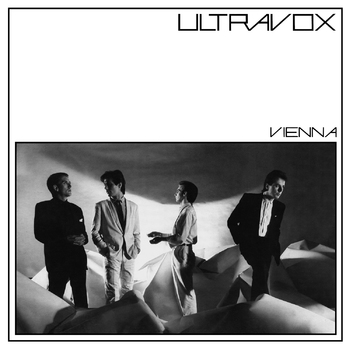 "The rhythm is calling."
Advertisement:

Vienna, released in 1980, is the fourth album by British band Ultravox. Their first since the departures of frontman John Foxx and guitarist Robin Simon the year prior, the album introduces Foxx and Simon's replacement, Midge Ure. The album's sound is a sharp contrast from Ultravox's prior works, shifting the former Post-Punk band into an artsier, New Romantic-influenced New Wave Music direction rooted in Ure and violinist Billy Currie's own background with the Synth-Pop band Visage. While Systems of Romance appeared to anticipate elements of this new sound, it was still decidedly rooted in the band's post-punk core.

In addition to its shift in sound, the album is also marked by a change in the band's creative style, becoming a more mutually collaborative unit and creating songs by throwing ideas around to form base structures. The culmination of all of this was an album that experiments in a large variety of styles based on a cohesive, sophistication-infused core; in particular, the band took a special liking to the song "Vienna", feeling that it so greatly encompassed what they wanted to do under Ure's lead that they chose to make it the album's Title Track.

The Title Track, released as the album's third single at the start of 1981, would end up catapulting Ultravox into commercial success, prompting strong sales of Vienna throughout 1981; the album would peak at No. 3 on the UK Albums chart, ending up as the 15th best-selling album of 1981 in Britain and later being certified platinum in both the UK and New Zealand.

Please remember to mention me in tropes you might leave behind: