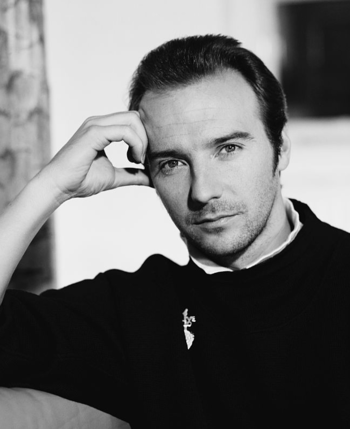 "It was a song written for a specific purpose: to touch people’s heartstrings and to loosen the purse strings, [The lyrics] had to be brutal. We were looking at television pictures of children spending five minutes trying to stand up."
On writing the charity song "Do They Know It's Christmas?" about the Ethiopian famine.
Advertisement:

Midge Ure is a singer, guitarist, keyboardist, producer, and songwriter from Cambaslang, Scotland. He is almost single-handedly responsible for reshaping New Wave Music in The '80s and forming the New Romantic genre, after he succeeded John Foxx in Ultravox. His Stage Name is a phonetic reversal of his real name Jim. He was highly successful as the front-man of Ultravox from 1980 to 1986.

His first musical venture was in 1972 as a guitarist for Scottish bubblegum group Salvation, later renamed Slik, later renamed PVC2. Jim McGinlay, one of the band members, christened him "Midge" because the band already had two members named James; the name stuck. In 1977, Ure left PVC2 and joined punk group Rich Kids alongside Sex Pistols bassist Glen Matlock and Rusty Egan; they broke up next year. For a very brief period from 1979 to 1980, Ure was the guitarist in the Irish rock band Thin Lizzy.

In 1978, Steve Strange, Billy Currie, Egan and Ure co-founded Visage, a project of Strange's nightclub The Blitz Club that launched the nascent New Romantic genre. In 1979, Currie, on the suggestion of Egan, convinced Ure to join Ultravox, an under-the-radar Post-Punk group, after former front-man John Foxx left to start a solo career. Ure whipped the band back into shape, becoming it's singer-songwriter, guitarist and second keyboardist, as well as completely overhauling their sound to showcase the newfangled instrument known as the synthesiser. Vienna, Ultravox's fourth album and the first under Ure, was released in 1980; Visage's first eponymous album was released that same year. Both LPs had an extremely influential monster hitnote "Vienna" for Vienna, "Fade To Grey" for Visage that caused a cascading effect of bands aping Ure's stylistic touches, like synthsisers alongside a traditional rock lineup and pompous, grandiose soundscapes. Ure thus became the founding father of two genres that dominated the U.K. music scene of the early to mid-80's. After recording Visage's second album The Anvil in 1982, Ure left the group citing creative differences with Strange. He met Mick Karn that same year and had several sessions with him, but all that came out of it was the arty Japan-lite single "After A Fashion" in 1983. In 1985, Ure released his first solo album, The Gift, which spawned the hit single "If I Was". Ultravox kept Ure as a front-man until they broke up in 1986.

Ure produced many other artists as his career rose, including Peter Godwin, Skids, and Snips as well as long-forgotten acts like Modern Man. He recorded a cover of "The Man Who Sold the World" for the soundtrack to the 1983 film Party Party, which would later be used in Metal Gear Solid V: The Phantom Pain.

In 1984, Ure co-wrote the cheesy Christmas classic "Do They Know It's Christmas?" with Bob Geldof; next year, they co-founded the Band-Aid trust and organised the famous Live Aid concert that saw artists ranging from Queen to Elton John. In 1988, Ure helped organise a tribute to Nelson Mandela's 70th birthday.