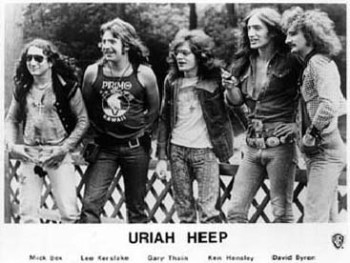 Uriah Heep are a British Progressive Rock band whose debut was released in 1970 and are still active today. They are considered one of the first Heavy Metal bands, with their initial albums released neck-to-neck with the foundational metal records of Led Zeppelin, Deep Purple and Black Sabbath. They stand out from their early 70s contemporaries by their deeper progressive stylings, a taste for the psychedelic and fantastical, and the very heavy presence of the Hammond organ (to an even greater extent than Deep Purple).

The nucleus of the original group was David Byron, a singer with an operatic voice and multi-octave vocal range and lead guitarist Mick Box, both of whom had played in a psychedelic group called Spice in the sixties. The third member of the core of Uriah Heep was Ken Hensley, who contributed keyboards, some guitar and most of the songwriting. Bassist Gary Thain and drummer Lee Kerslake completed the "classic" line-up that played on the Demons and Wizards and The Magician's Birthday albums.

Presently, Box is the only member who has been in every line-up.

Not to be confused with the David Copperfield character for whom they're named.

"Stealin' when I should have been tropin'":