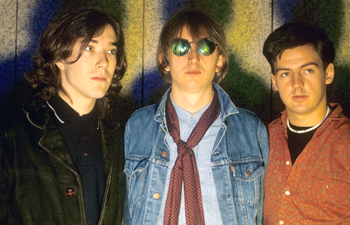 From left to right: Lee Harris, Mark Hollis, Paul Webb (in 1984).
It's my life, don't you forget,
Caught in the crowd, it never ends.
"It's My Life"
Advertisement:

Talk Talk were a British New Wave-turned-Post-Rock band in The '80s known for one of the standout examples of Growing the Beard and successful New Sound Albums in Alternative Rock. But let's not get ahead of ourselves just yet.

Their members were as follows:

While Hollis from the start cited jazz musicians like Miles Davis, John Coltrane, and classical artists like Bartók and Debussy and influences, the band's financial situation in their early years forced them to rely on synths and brought about predictable comparisons to New Wave artists like Duran Duran. Snapped up by EMI, the lads released their first album in 1982, The Party's Over. Produced by former David Bowie and Duran Duran engineer Colin Thurston, the album showcased the Synth-Pop / New Wave sound that attracted accusations of derivativeness but scraped the UK Top 40 with "Talk Talk" and "Today." In the ensuing tour, the band opened for Genesis at a concert, forcing Hollis to spend most of the set avoiding whatever fans threw on stage.

Brenner left in 1983, and his replacement with Tim Friese-Greene proved to be probably the most important development in Talk Talk's career considering the key role he played later on. The band then lurched back into the studio and came out in 1984 with the less synthesizer-heavy It's My Life, which managed to spawn the titular hit single and climbed up charts... everywhere except the UK. The next album, Colour of Spring, followed two years later and showed the band completely abandoning New Wave, while still remaining accessibly "pop". It became their best-selling album.

Buoyed by the success, EMI granted Talk Talk a large budget and no schedule for recording the next album. The band proceeded to lock themselves in Wessex Sound Studios (a former church hall converted into a recording studio) for about a year, refusing to allow execs or their manager to visit, and recorded hours upon hours of improvised material with 12 additional musicians and the Chelmsford Cathedral choir, using incense, candles and occasionally complete darkness to "get in the mood", which Hollis and Friese-Greene would then painstakingly edit together. The result: Spirit of Eden, whose 6 pretty long tracks showed the band moving into experimental, jazz- and ambient-influenced territory that helped, if not create, at least codify Post-Rock.

Critical acclaim greeted the record while sales predictably decreased a bit, and some attempted Executive Meddling from EMI making them release "I Believe in You" as a single led to a lawsuit that the band eventually won and had their contract dissolved. Webb left in the meantime, and the now-reduced-to-a-trio Talk Talk moved to Polydor Records. Their last album, Laughing Stock, came out in 1991 on Polydor's famed jazz label, Verve. The recording sessions were even more demanding, the list of guest musicians was longer, the track lengths increased as well, the music moved in an even more minimalist, improvisational direction, the influence on Post-Rock was larger and the critical acclaim even larger. In short, Laughing Stock was Spirit of Eden turned Up to Eleven.

Small wonder that the band couldn't follow up on it: they disbanded a year later. Hollis released a self-titled solo album in 1998 and then disappeared from music completely. Webb (under the moniker Rustin Man) recorded a collaborative album with Beth Gibbons of Portishead to rave reviews in 2002, and started a new band with Harris. Friese-Greene returned to a solo career while moonlighting as an occasional producer (such as on Lush's Sweetness and Light EP).

On February 24, 2019, reports emerged that Hollis had passed away at the age of 64. The reports were confirmed two days later by his former manager, who specified that Hollis had died of "a short illness from which he never recovered." No exact date of death has been specified, but the illness was later confirmed in 2022 to be cancer; Hollis will be dearly missed.