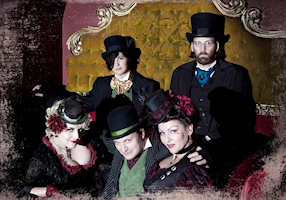 The band, with a couple of "friends"...
Unextraordinary Gentlemen (UXG) is a musical project formed in Los Angeles in 2005 by bassist/keyboardist Richard Pilawski & vocalist/lyricist Eric Schreeck to "...explore our love for post-punk, synth-pop, industrial & experimental music combined with the literary genre of Victorian fantasy." The project went public in early 2007, joined by Jennifer Pomerantz on violin. The band's name is a tongue-in-cheek nod to Alan Moore's The League of Extraordinary Gentlemen. UXG has been called one of the "foremost of the musical assets of steampunk".
Advertisement:

The band has created a back-story set in a fictional area based on a mixture of Victorian England and the American Old West, with the band members taking on alternate identities that relate to that back-story. In character, the band members are time travellers who have come from that past using one of Professor Mangrove's amazing inventions. Most of their songs are set in and tell stories about this fictional 19th century place, sung from the points-of-view of characters like "Clive the Barker", "Dread Penny" and "Elwood Lovekraken". A page on their website

contains "The Unextraordinary Encyclopedia", a list of names, places and events in this fictional world that are referred to in their music.