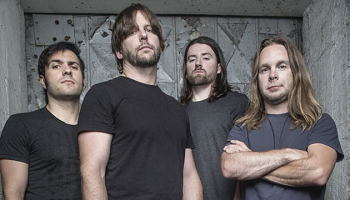 Unearth are an American Metalcore band forming in 1998. The band formed in Massachusetts.

Unearth was formed by Trevor Phipps, Buz McGrath, Ken Susi, Mike Rudberg, and Chris Rybicki. Now important member Phipps was reluctant to join until showing up to a jam session for one of Susi's side bands, Unearth, and Phipps agreed to join after hearing the song "Shattered by the Sun." They released their first EP called Above the Fall of Man in May 1999 on an independent label, then signed to Eulogy Recordings to release The Stings of Conscience in 2001 and the Endless EP in 2002. During the process of recording Endless, Chris Rybicki left the group and was replaced by John Maggard.

Mike Rudberg departed from the group days after their performance at The SXSW in 2003, having performed the show in the nude. The rest of Unearth would then use Tim Mycek of Sworn Enemy as temporary replacement drummer and Kia Eshghi of Rumi on guitar. Before Buz returned, Mike Martin from All That Remains also filled in for him. After Buz's return, Adam D from Killswitch Engage also filled in on drums for the last 2 months of the year.

The second album, The Oncoming Storm, was relased in 2004 under Metal Blade records, with Mike Justian debuting as Rudberg's permanent replacement. This album made them a big name in the metalcore community, gaining huge hype from the fanbase despite mixed critical reception, and achieving the relatively rare feat of selling over 100,000 copies (their next three albums all followed suit). In the summer of 2004, they toured alongside Lamb of God, Shadows Fall, and Killswitch Engage.

In 2006, the band released III: In the Eyes of Fire. Shortly afterward, Mike Justian was fired from the band for numerous reasons, and Gene Hoglan of Strapping Young Lad was recruited on a temporary basis, before Derek Kerswill became the new permanent drummer in 2007. 2008 saw the release of The March, a concept album based on humanity as a whole. The album also featured a re-recording of "The Chosen", which appears on Aqua Teen Hunger Force Movie.

Former bassist Chris Rybicki, who was one of the original members, had passed away in a car accident in 2010.

Kerswill would leave in October 2010, with the band bringing in Justin Foley to do session work for their fifth album, entitled Darkness in the Light, which was released in 2011. Later in the year, the band recruited Nick Pierce as a live fill-in on drums, and then brought him in permanently in January 2012.

In October 2014, the band put out their sixth album, Watchers of Rule; many noticed that Maggard was not credited on the album, and interviews around this time confirmed that he is no longer in the band. The bassist position has yet to be filled, but Matt DeVries had been touring with the band since 2013, when Maggard stopped being able to tour. As of the end of 2014, DeVries has stepped down from the position (not to mention music in general, at least for the time being) and former Savage Messiah bassist Chris O'Toole has taken his place.

Unearth Displays examples of These tropes: