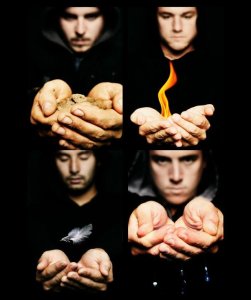 The four elements of The Alchemy Index.

"We all were lost; now we are found
No one can stop us or slow us down
We are all named and we are known
We know that we'll never walk alone."

Thrice is an experimental rock band from Irvine, California, formed in 1998. Its members are Dustin Kensrue (lead vocals, guitar), Teppei Teranishi (guitar, keyboard, backing vocals, mixing), Edward “Eddie” Breckenridge (bass, keyboard, backing vocals), and Riley Breckenridge (drums), all of whom have been part of the band since its founding. Thrice is known for its constant stylistic evolution: each album sounds significantly different from the last, and the band has explored genres ranging from hardcore punk, post-hardcore and progressive rock to folk, blues and ambient music.

Thrice is unique in that two of the members (Kensrue and Teranishi) are devout and open Christians, while the other two have no religious affiliations. Because Kensrue is the lyricist, the band’s songs frequently (albeit subtly) incorporate Christian themes, but due to their mixed membership and desire to reach a wider audience they have largely avoided the Christian Rock stigma.

The band went on an indefinite hiatus following a spring 2012 farewell tour. They reunited in 2015, returning more popular than ever— their 2016 album To Be Everywhere Is To Be Nowhere quickly became their highest-charting release to date. Their most recent album, Horizons / East, was released in September 2021.