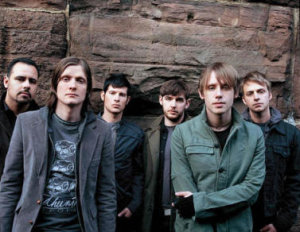 Whatever else you do, Stay True.
Advertisement:

Thursday were an Alternative Rock band from New Brunswick, New Jersey. They were one of the forefathers and Trope Makers of the 2000s Emo scene, credited for influencing many bands and bringing the emotive hardcore genre into the 21st Century. They would later switch to a more Alternative Rock sound with a bit of Shoegazing and Post-Rock elements while keeping what would be their distinct sound. They unfortunately have broken up as of 2011, after releasing No Devolución.

After splitting ways, members have joined other side projects while Geoff Rickly has toured solo (with some help from backing members and friends). He released his first mixtape (read: EP)

in November 2012, continued making music with his hardcore/powerviolence outfit United Nations and is now the lead singer of No Devotion, formed with the members of Lostprophets who are not pedophiles.

The band reunited in 2016 as part of an effort to repair their friendship after their previous split, before amicably breaking up again in 2019 after a long tour, though Geoff has left the door open for more shows due to international fans complaining that they didn't tour outside North America.