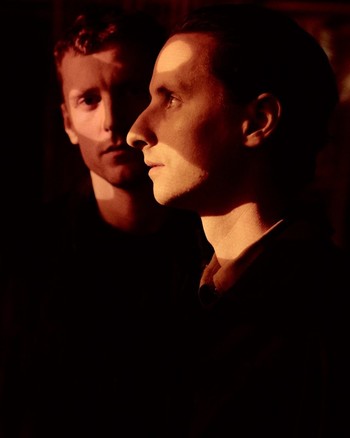 "What's your favourite number, what does it mean?"
— "Numbers"
Advertisement:

These New Puritans is an English band founded in 2006.

They have released four albums so far, all of them very different. Beat Pyramid was a Post-Punk style album, often compared by critics to The Fall, and featured very obtuse and literate lyrics, combined with hip hop and dancehall-derived rhythms. Hidden was something else entirely - an extremely weird album based largely around electronics and Everything Is an Instrument samples, featuring a horn section and Japanese taiko drums on most songs and with influences from world music and neoclassical music. On Field of Reeds, they've drifted further into a neoclassical influence, this time with an emphasis on much slower, understated material. Their latest, Inside the Rose, falls somewhere between the styles of the previous two.

The band consists of twin brothers Jack (vocals, guitar, producer, multi-instrumentalist) and George Barnett (drums, programming), but have previously included Thomas Hein (bass guitar, sampler, keyboards, percussion) and Sophie Sleigh-Johnson (keyboards, sampler) in their ranks, having both left to pursue their own projects.