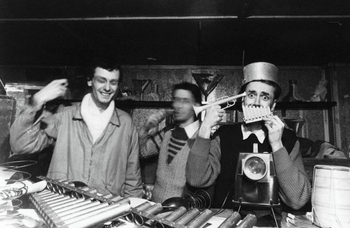 Sandwiched between the dominance of Progressive Rock and Krautrock in the early 1970s and the emergence of Punk Rock and Post-Punk later on in the decade, was a little known group by the name of This Heat, who somehow managed to bridge all these scenes together whilst simultaneously sounding utterly unique.

This Heat first came together in 1975 by Charles Bullen and Charles Hayward, both seasoned musicians who had previously played together in the prog rock band Quiet Sun (led by Phil Manzanera of Roxy Music). Shortly after they acquired a third member, Gareth Williams, who despite not being able to play an instrument at the time, contributed greatly to their interest in tape splicing and experimentation. They chose for themselves the name This Heat in reference to the British heat wave of 1976, which was then regarded as the hottest summer ever recorded, and began playing whatever the hell they wanted.

While they started playing in the attic of Hayward's parents' house, the band eventually converted a disused cold storage room into a studio and began experimenting with found sounds and tape loops. This Heat soon became a favorite of legendary DJ John Peel, who gave them crucial radio exposure while they were still working out material for their debut album. After a recording process that lasted almost three years, they finally released their self-titled debut in August 1979. Consisting of equal parts sparse, droning soundscapes and raw, cacophonous rock songs, the album sounded like nothing else on the market, and while overshadowed by the likes of Unknown Pleasures which released in the same year, it's still considered a demented classic of underground rock music.

After their debut, the band began to embrace slightly more conventional song structures. They released a two track EP, Health and Efficiency, in 1980, and in 1981 released their most remembered album, Deceit. Saturated in Cold War nuclear paranoia, the album is no lighter than their debut despite its more accessible sound.

Williams left the band shortly before the release of Deceit to study in India, who eventually broke up in 1982 following a brief European tour with two other musicians. In 2001 the original trio made a tentative effort to reunite, however these hopes were dashed when Williams died of cancer. In 2016 Hayward and Bullen began playing This Heat's material again under the name This is Not This Heat. Featuring a band of guest musicians which included Thurston Moore and Alexis Taylor, this iteration of the band received critical acclaim and was considered a fitting tribute to the group's legacy.

We are all tropers, we live to regret it: