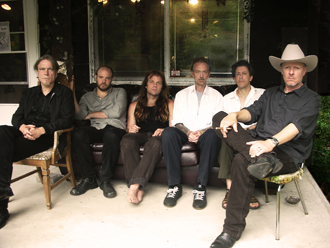 Swans is a rather diverse No Wave, Noise Rock, Post-Punk, and lately Post-Rock band from New York City. The band was initially formed in 1982 and ran until 1997 with various lineups, and was reformed in 2010. Throughout its history, leader Michael Gira has been the band's only constant member, although Jarboe, who was with the band from 1984-97, and Norman Westberg, whose tenure spans 1983-95 and 2010-present, are notable for their long tenures.

The only uniform traits that you could get from their music, if you will, is that the song structures often focus on repetition, instrumentally and/or lyrically, but that they still manage to not get tiresome because of the chaotic nature of their work. This is especially apparent on their earliest work.

For most of their existence they have been primarily an underground act (although they have finally seen a bit of mainstream success, or at least Mainstream Obscurity, with their reunion) and the one song that the public (might) know best would be their cover of Joy Division's signature song "Love Will Tear Us Apart." They've also released two other singles, 13 studio albums, 9 live albums, 7 compilation albums, 11 EPs, and have made four music videos, but these aren't exactly well known.

They got their start with a self-titled EP in 1982, followed by their LP debut Filth in 1983. The latter is known for its harsh noise rock and industrial influences. Once Jarboe joined the band, Swans slowly moved away from the brutal aggression of Filth and the 1984 releases of Cop and Young God, opting for slightly softer (but just as insane) music, beginning subtly with the 1985 Time is Money 12", continuing with the "money" albums (Greed and Holy Money, 1986) and culminating with Children of God in 1987.

Following Children of God, Gira stated that he was tired of Swans being affiliated with the brutal noise of the first four LPs and also felt that the audience had expectations that he probably wouldn't fulfill. Beginning with The Burning World and going on into the '90s, Jarboe began to have an even bigger role in the band and softer elements, including classical instrumentation and, in later years, vibraphone.

When "Love Will Tear Us Apart" became a surprise hit on US college radio, MCA's sublabel Uni Records offered Swans a record deal. Gira described it as this:

"I've worked so hard all my life. At 15, I was digging ditches in the deserts of Israel, and I put myself through college painting houses. I never saw any money from any of our records. So by the time I finally got that carrot dangled in front of me, it was like, at last I can make a living at what I love to do."

They took the offer and released The Burning World in 1989. Unfortunately, troubles with Uni/MCA led to the band leaving the label and starting their own company, Young God Records. Their first Young God release was 1991's White Light from the Mouth of Infinity.

Later on down the line came Love of Life, the EP/single Love of Life / Amnesia, and 1995's The Great Annihilator, possibly their most accessible album. Eventually, though, Gira decided to break up the band, citing exhaustion, audience misconceptions, and a desire to start over and work on a smaller scale. They released an epic double-album (one of the most highly regarded albums of their career) Soundtracks for the Blind and went on a world tour, which were showcased on the live album Swans Are Dead as a testament to their last years together. Jarboe moved on to a successful solo career, while Gira started a more folk influenced band Angels of Light.

In January 2010, their MySpace page was changed to display "SWANS ARE NOT DEAD," and Gira released a solo album on Young God, entitled I Am Not Insane, to raise money to record the new Swans album. In September of 2010, this was realized with the release of My Father Will Guide Me Up a Rope to the Sky. Another reunion album, The Seer, followed in August 2012, to virtually universal acclaim. It also expanded their audience substantially. The band's third reunion album, To Be Kind, came in May 2014; like The Seer, it is a double-disc set containing around two hours of music, and like The Seer, it has been highly acclaimed. It also climbed up to number 37 on the the Billboard 200. The absence of Jarboe (although she does make guest appearances on two songs on The Seer) has altered their sound to an arguably less melodic style.

The band's fourteenth studio album, The Glowing Man, was released on June 17, 2016. Gira followed it up by announcing that the current version of the group is coming to an end, but he will continue to make music under the name Swans.

The current lineup is as follows:

In 2018, music writer Nick Soulsby published Swans: Sacrifice And Transcendence: The Oral History, which tells the band's story through extensive interviews with Gira, current and former members, and almost everyone who's ever been associated with the group.

The band exemplifies the following tropes: