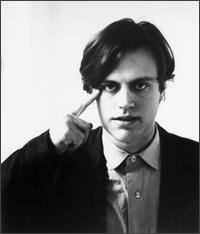 Sidney Matthew Sweet (born 6 October 1964) is an American Power Pop musician who gained some success with the Alternative Rock boom early in The '90s, tapered off, and instead settled into recording and touring for a devoted fanbase.

Beginning to write and record songs as a teenager, Sweet moved to Athens, Georgia to attend college, attracted by the city's alternative music scene. After some stints in Community Trolls, Oh-OK and The Buzz of Delight, he was signed to Columbia Records in 1985. After his debut Inside flopped, he was dropped and instead moved to A&M Records, where he made another unsuccessful album, Earth. These albums suffered from severe cases of multiple producers and over-use of synths (with the first being recorded in one-man band mode) and received given mixed reviews at best. A&M also gave him the boot after Earth, and he moved to Zoo Entertainment instead.

Suffering from a Creator Breakdown after a divorce, Sweet entered the studio in 1990 to record a new album, with his new crack band formed of ex-Voidoids members Ivan Julian (guitar), Robert Quine (guitar), Fred Maher (drums) and ex-Television guitarist Richard Lloyd. The third time proved to be the charm, as Sweet and Maher's straightforward production combined with the tension between Sweet's Epic Riffs and Lloyd and Quine's avant-garde chaos made Girlfriend a critical success upon release the next year. The two successful singles "Girlfriend" and "I've Been Waiting" didn't hurt either.

For his followup Altered Beast, Sweet recruited famous guest musicians such as Mick Fleetwood, Pete Thomas, Jody Thomas, session keyboardist Nicky Hopkins and fiddle player Byron Berline, taking his Power Pop in a more diverse direction and supplying Darker and Edgier lyrics. Needless to say, this confused his newfound audience and attracted lukewarm reviews. The next album, 100% Fun, reduced the band to its key members but otherwise continued with the Darker and Edgier direction (the title comes from Kurt Cobain's suicide note, for starters).

Sweet's albums began reversing from the Darker and Edgier course with Blue Sky on Mars, but its reception was lukewarm given that it lacked his earlier secret weapon: Lloyd and Quine's gnarly, edgy guitar work. It failed to spawn even an Alternative Rock hit like his previous albums, leaving him to the status of Cult Classic. Not that that's discouraged him - to this day he continues writing hooky Power Pop albums for his fanbase. Well, okay, except In Reverse. And he did reunite with Lloyd for Kimi Ga Suki.

Sweet has a huge following in Japan, which can be attributed to the fact that he is One of Us: the videos for "Girlfriend" and "I've Been Waiting" used clips from Space Adventure Cobra and Urusei Yatsura, respectively, before anime became really popular Stateside. Kimi Ga Suki was originally a Japan-only release as a "thank you" for his fanbase there before unexpected popularity also brought it to the USA.