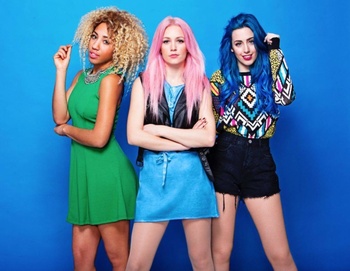 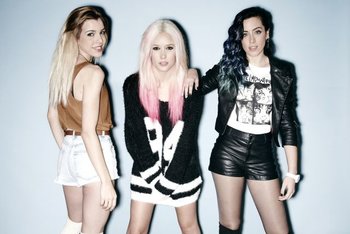 The current and original lineups. Left to right in the upper picture: Tamy Nsue, Alba Reig and Sonia Gómez. L-R in the lower picture: Rocío Cabrera, Reig and Gómez.
Sweet California is a Spanish Girl Group formed in 2013 by Alba Reig, Sonia Gómez and Rocío Cabrera. The latter left the band in early 2016 and retired from music altogether a year later, and was replaced by Tamy Nsue. At a commercial level, they are the most succesful girl band Spain has ever seen.
Advertisement:

After forming, the trio started out by posting Cover Versions in their YouTube channel such as Olly Murs' Troublemaker until their first album, Break of Day, came out in 2014, followed up by Head for the Stars in 2015, which would receive a 2.0 version in 2016 after Rocío's departure. Later in 2016 came 3, the first full album of the band's current lineup.

Be ready to smile and shout, "These are the tropes!":