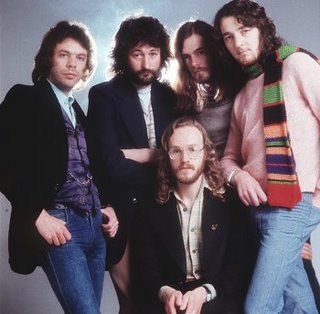 The classic lineup, circa 1979. Left to right: Bob Siebenberg, Rick Davies, John Helliwell, Dougie Thompson, Roger Hodgson.
"When I was young it seemed that life was so wonderful,
A miracle,
Oh it was beautiful, magical,
And all the birds in the trees well they'd be singing so happily,
Oh joyfully,
Oh playfully watching me."
—"The Logical Song"
Advertisement:

Supertramp is a British Progressive Rock band, that was big in the 70s and 80s, with such songs as "The Logical Song", "Breakfast in America", and "Take The Long Way Home", all three of which appeared on what is considered their greatest album, Breakfast in America. Their most well-known members are singers and multi-instrumentalists Roger Hodgson (who left in 1983) and Rick Davies (still in the band).

Give a little bit of your tropes to me: