Music / Crime of the Century 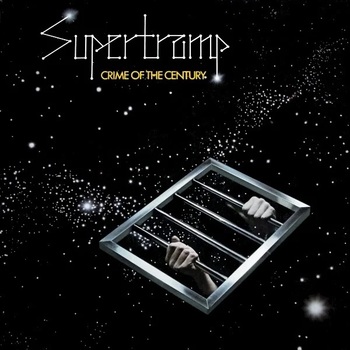 "I'm just as sane as anyone, it's just a game I play for fun."
"Now they're planning the crime of the century.
Well what would it be?
Read all about their schemes and adventuring.
Yes, it's well worth the fee."
—"Crime of the Century"
Advertisement:

Crime of the Century is the third album by British rock band Supertramp, released in 13 September 1974 through A&M Records. After the failure of their first two albums, Supertramp broke up, with Rick Davies and Roger Hodgson seeking new members as they record for the first half of 1974. The resulting album was a resounding commercial and critical breakthrough for the band, reaching the top five album sales charts in the UK, Germany and Canada while reaching Gold certification in the United States by 1977. It was also through this album that the classic lineup with then-new members Dougie Thomson, Bob Siebenberg and John Helliwell was established, with the three remaining until the first breakup in 1988.

Supported by the singles "Dreamer" and "Bloody Well Right".

Well can you put your tropes in your head? Oh no: