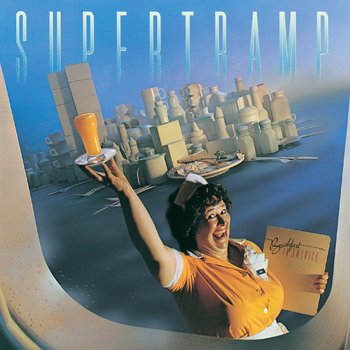 "Take a Jumbo 'cross the water. Like to see America!"
There are times
When all the world's asleep.
The questions run too deep
For such a simple man.
Won't you please,
Please tell me what we've learned?
I know it sounds absurd,
But please tell me who I am.
—"The Logical Song"
Advertisement:

Breakfast in America is the sixth studio album by Supertramp, released through A&M Records on 29 March 1979. It was Supertramp's most commercially successful album, having gone quadruple platinum in the United States alone, and supported by charting singles such as "The Logical Song", "Goodbye Stranger", "Take the Long Way Home" and "Breakfast in America". It was also regarded for its album cover, which won the 1980 Grammy for Best Recording Package and still regarded as one of the top of its kind.

I'm playing my tropes upon you, while there's nothing better to do: