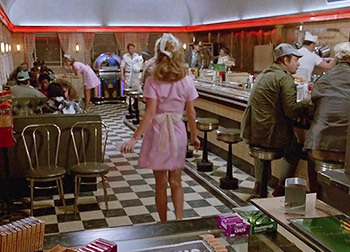 Whatever you do, don't order the Space Special.
"Is there anything on this menu that is not swimming in gravy?"
— Yzma, The Emperor's New Groove
Advertisement:

Many Real Life examples are converted diner cars, but if you happen across a diner that looks like one, consider its location and upkeep. If it's nowhere near a railyard and looks freshly polished, chances are it's an example of Square Peg, Round Trope; expect to see clean booths and an overpriced menu, and your chances of hearing Hash House Lingo or banter with loyal regular customers are slim. If, however, it appears to be a real diner car on a decommissioned spur near a railyard across from The City Narrows, it might be this trope.

Oh, and by the way: the American diner is very important to the culture of the Northeast, and is practically a religion in New Jersey. Argue with a Northeasterner—and especially a New Jerseyan, and really especially a North Jerseyan—about what a diner is at your own peril.

It is also common to have a ordinary greasy spoon in a quite fantastic setting, in a case of Recycled IN SPACE. Occasionally, it features as the Inn Between the Worlds.

Similar to the Malt Shop, but lacks any kind of Nostalgia Filter.

The British equivalent is basically similar in most respects, but will offer some tea (the strong, "builder's tea" variantnote The Other Wiki used to say "weak, tepid, milky tea (or, in transport cafés, tea thick enough to float a lorry wheelnut, served just below the melting point of the mug)" and was 100% correct on both counts) as well as coffee. The decor usually involves Formica tables and chairs rather than booths, sometimes bolted to the floor. Usually offer an "all-day breakfast" of some sort that follows the same basic principle as the breakfasts in the American version, lots of carbs and protein but not a lot of other micronutrients, but most offer some sort of vaguely healthy option; "Meat and two veg" was the traditional lunchtime option, but nowadays the menu usually extends to things like lasagne or chilli con carne, and maybe a Sunday roast. Trying to order biscuits and gravy will get you some very funny looks.