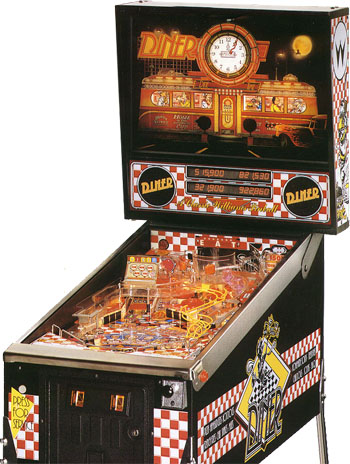 Diner is a Physical Pinball Table designed by Mark Ritchie and illustrated by Mark Sprenger. It was released by Williams Electronics in 1990.

Taking place in a 1950s-style train car diner, the player takes the role of a waitress who has to serve five hungry customers — Haji, Babs, Boris, Pépé, and Buck. As each person calls out an order, hit the drop targets for their dish and their sides, then collect the Grill bonus before it gets cold. Serve all five customers and you can collect the Dine-Time Jackpot, an award based on the game's backbox clock. For more tips, make successive shots to the cash register, Beat the Rush, then spell D-I-N-E-R for a chance to Stir the Cup for a pipin' hot couple'a millions.

Although Diner was only a modest success for Williams, it remains a popular game for players who enjoy its lighthearted theme, varied shots, and humorously appropriate sound effects and music. A digital version was once available for The Pinball Arcade before the license to all WMS tables expired on July 1, 2018.