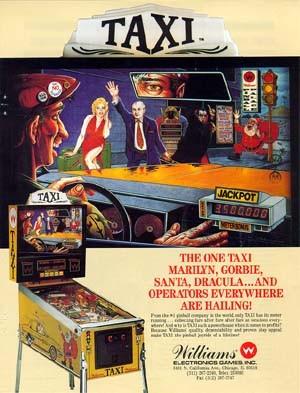 Note: Marilyn does not appear in this game (except on a few machines).
Gorbie: "Hey, comrade taxi!"
Advertisement:

Taxi is a Physical Pinball Table designed by Mark Ritchie with art by Python Anghelo. It was released in 1988 by Williams Electronics.

Compared to other Pinball games of the time, Taxi is deceptively simple. As a taxi driver, pick up a crazy cast of characters — including former Soviet Leader Mikhail Gorbachev (Gorbie), Dracula, and Santa Claus — then take them to the airport and collect the jackpot. The longer you play, the more tips you'll put on the meter, so take the Express Lane and loop the airport for an even bigger score.

Taxi is proof that a pinball game doesn't need complicated rules to be challenging, as most of the high-scoring shots are timed, and a great score requires prodigious flipper skills. The uncomplicated layout makes it appealing to beginners, while the fast action and broad crisscrossing loops keep everyone attentive.

A digital version of this pinball was available on The Pinball Arcade until the license to the Williams and Bally tables expired on July 1, 2018.