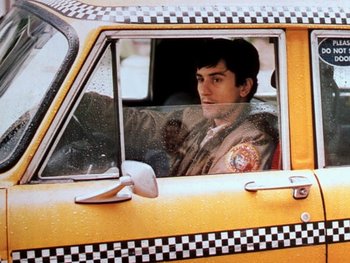 "I go all over. I take people to the Bronx, Brooklyn, to Harlem.
I don't care. Don't make no difference to me."
— Travis Bickle, Taxi Driver
Advertisement:

In Real Life, a common means of transportation in urban environments is to take a taxicab. As a result the Taxi makes a cameo in many stories, is a plot point in several of them, and in some may be the whole point of the story. Especially likely to be seen in New York City or its fictional equivalents. A New York taxi in a movie or TV series is likely to be an old-fashioned '50s-style Checker model.note The last of which was retired from Real Life NYC service in 1999, though the motif held.

Related to Not My Driver, Follow That Car, Failing a Taxi, and in the UK Driver of a Black Cab.

Examples of taxis as the whole point of the story:

Examples of taxis as a plot point:

Examples of taxis as cameos: