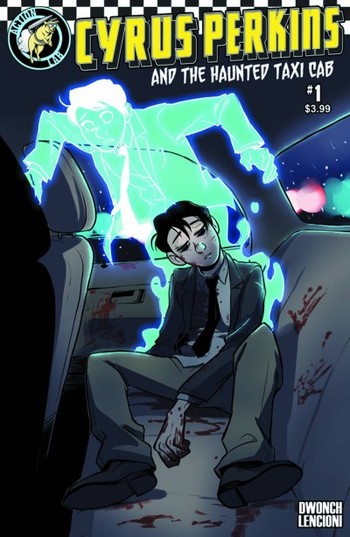 Cyrus Perkins and the Haunted Taxi Cab is a Comic Book by Dave Dwonch.

Cyrus Perkins is just an average Joe who makes a living driving a taxi cab. That all changes however, when a boy with a gunshot wound in his stomach climbs in. After a short while, the boy dies in Cyrus' back seat. Then, Cyrus finds that the boy's spirit is now haunting his taxi cab.

Now, Cyrus needs to help the boy, Michael, solve the mystery of his murder to grant him the peace he needs to move on to the afterlife. If he can't, then Michael will never leave.

The comic was funded on Kickstarter in under 48 hours. It was released February 10th, 2016.

Cyrus Perkins and the Haunted Taxi Cab provides examples of: