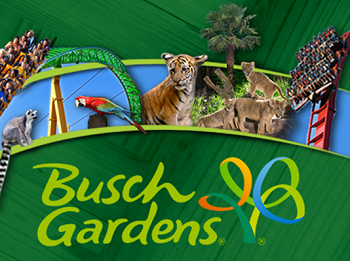 Busch Gardens is the name of a pair of theme parks in the United States that also function as zoos, featuring a variety of rides and attractions amongst the animal exhibits. The parks are owned by the SeaWorld Entertainment group, and were formerly owned by the Anheuser-Busch company.

The parks were originally created by Anheuser-Busch as a way of expanding their brand and showcasing their products to the public. Over time, it became less of a showcase and more of a theme park with the addition of numerous rides. A few decades later, the parks would be united under the same roof with SeaWorld when Anheuser-Busch purchased the company in 1989.

In 2009, Anheuser-Busch was bought out by InBev, who had no interest in running theme parks, and thus sold both Busch Gardens and SeaWorld to the Blackstone Group, who spun them off in an IPO in 2013.

The two Busch Gardens locations include:

Adjacent to both locations are water parks that, while not being connected to the Busch Gardens brand, are still a part of SeaWorld Parks and Entertainment. Tampa's water park is called Adventure Island, whereas Williamsburg's is known as Water Country USA.