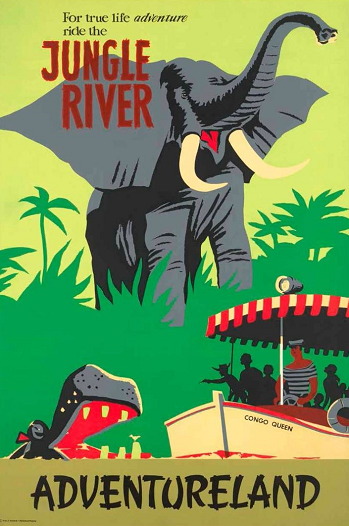 Look at those hippos, they're wigglin' their ears. Just like they've done for the last 50 years.
"Ladies and Gentlemen, welcome aboard the World Famous Jungle Cruise! I'll be your skipper for as far as we get."
Advertisement:

Jungle Cruise is an outdoor boat ride that can be found at the Disney Theme Parks. It is among the very first Disney attractions to come into being, having opened with Disneyland in 1955.

Located in the Adventureland area of each of the parks, the attraction is themed as an exotic trip across the various rivers of the world operated by the Jungle Navigation Company, which shifted from shipping to tourism to increase profits. Guests board a '30s era British tramp steamer boat, where they are immediately introduced to their "skipper", who along with piloting the ship also provides more than the daily recommended dose of puns and cheesy humor. Throughout the experience, riders are met with sights such as an elephant bathing pool, ancient ruins, an African Savannah, as well as the too-close-for-comfort sights of snakes, mischievous gorillas, ravenous head hunters, hippopotamuses, and more.

The ride can be found at four of the six Disneyland parks across the globe, including:

The Jungle Navigation Company played a prominent role in the Tales From Adventureland book series, and some elements of the now-defunct "Pleasure Island" nightclub district in Walt Disney World tied in to the ride. A movie based on the attraction, also titled Jungle Cruise, was released in July 2021. In 2021, the California and Florida versions of the ride received overhauls

to remove the indigenous tribal characters and add an overarching story regarding a failed prior Jungle Cruise expedition, whose hapless voyagers are encountered along the way. The new iteration of the ride does not tie into the film adaptation beyond a handful of props in the queue.

"Wave goodbye to all those people on the dock.... 'cause you may never see 'em again. Of course, you've never seen 'em before, so you aren't gonna miss anything."

Tropes shown in Jungle Cruise include:

"Well, it looks like our time together is finally coming to an end. I'd really like to thank you all for traveling with me today. You folks have been an outstanding crew; and pretty soon, you'll be out standing over there on the dock."