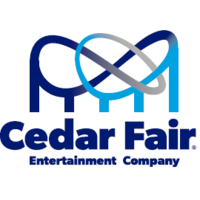 Fun. To us, it's serious business.
Advertisement:

The company started in 1870 as a recreational park named Cedar Point, which initially belonged to Cedar Point Pleasure Company. In 1978, Cedar Point acquired Valleyfair, after which the company was renamed to Cedar Fair (a portmanteau of "Cedar" from Cedar Point, and "Fair" from Valleyfair). In 2006, the company purchased a group of parks around the US (and one in Canada) previously owned by Paramount Pictures as Paramount Parksnote before then, they had been under KECO, the Kings Entertainment Company, formed in the mid-1980s by a group of managers and executives who purchased the parks from their former owner, Taft Broadcasting, owners of Hanna-Barbera; ironically, Kings Island, the Cincinnati flagship, featured in an episode of The Brady Bunch, as Paramount was an investor in Taft at the time..

Cedar Fair properties (former KECO/Paramount properties are marked with a {*}):

Welcome back tropers, how was your ride?