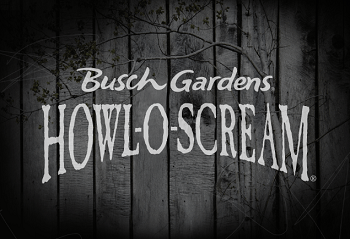 Howl-O-Scream is an annual Halloween event that operates at both of the Busch Gardens parks in Tampa and Williamsburg, as well as at SeaWorld San Antonio and San Diego. Usually running from September to the end of October, the event, like most theme park-based ones — is massive. Among the its offerings are haunted houses (indoor walk-throughs with plenty of surprises), scare zones (themed outdoor areas with even more "surprises"), and shows (most notably Fiends — an annual show featuring a much-raunchier take on Dr. Frankenstein and his monster).

The event first began in 1999 at the Williamsburg park, while on the same year the Tampa park ran a Lighter and Softer Halloween event called Spooky Safari, that, while featuring one haunted house (Haunted Jungle Trail), was mostly geared towards families. That all changed the next year, when the Tampa park adopted the Howl-O-Scream title and began phase out the family activities and target teens and adults only. 2000 was also the year that the event began at SeaWorld San Antonio, where it "shares" the park with the family-friendly Halloween Spooktacular event, which operates during the daytime while Howl-O-Scream operates at night. Since the inception of the events, they have all gone on to be among the highest rated haunt experiences in the world.

Thanks to its Central Florida-based location, the Tampa event is often the most talked about, especially due to the fact that it competes with Halloween Horror Nights at Universal Orlando. Both events share close similarities beyond the basic haunt event staples; as like Horror Nights, Howl-O-Scream frequently makes the use of "Icons" — original horror characters that serve as the center of the event's theme and marketing, with a different one usually being created for each year. Where HOS differs from HHN, however, is that it is uses fully original concepts for its attractions, while Halloween Horror Nights dabbles between using original creations and intellectual properties for its offerings.

In addition to the mentioned houses, zones, and shows, Howl-O-Scream has a few smaller offerings, such as dance parties, and on some years an 18+ nightclub. Due to the nature of the parks, all of the animal exhibits and shows are closed for the event, though most of the rides (particularly the roller coasters) remain operational.