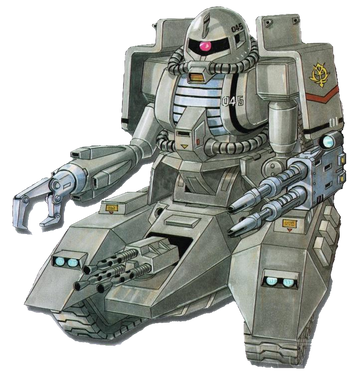 Mechas of this category are usually depicted as being able to carry heavier loads (thus enabling them to equip bigger armaments or several standard sized ones) and run a bit faster than legged mechas but perform poorly on rough, uneven terrains (such as mountains and forests) and are less agile at close quarters combat. Due to this, tank tread mechas are usually assigned to support and artillery roles, providing indirect and long range fire support for the more agile legged mechas at the front. Outside of military usage, tank tread mechas are often found at construction sites, warehouses, and mines, acting as multipurpose work vehicles. Complete with modular arm attachments. Bonus points if it has more than two arms for maximum multitasking.

If they are Transforming Mechas, then one of their configurations or Partial Transformations should invoke this trope. This is often depicted with their legs folding aside to make way for the tank threads that will replace them. Sometimes the legs themselves transform into the tank platform with each leg opening up and deploying the tank treads. Other more elaborate and creative transformations exists besides these. When used on Combining Mechas the legged mecha usually merges with an accompanying support vehicle or other mecha(s) to turn into a giant mobile fortress.

Tank tread mechas are most prevalent in Real Robot stories due to their practicality in design, though tank tread mechs in Super Robot stories are not unheard of, especially so in older shows. Sometimes it's one of the mecha's transformation modes which exchanges its legged form's agility, dexterity and maneuverability for speed, stability, and lower profile. In real life it would be problematic to stick a humanoid upper body onto a tracked fighting vehicle, since that would add a lot of weight compared to a normal tank turret, and also be a bigger, higher target requiring more frontal armor. Crew survivability could be improved by having the cockpit down inside the tracked hull instead of the robotic upper part. As with Walking Tanks, these mechas would probably serve better as workhorses than as fighters.

Not to be confused with a legged mecha who have tank treads on their feet and use them like motorized rollerblades on a human or one riding a tank like a mount or vehicle. The key idea here is mechas that propel themselves on tank treads due to the lack of legs. It also doesn't have to be exclusively tank treads; It can also be half-tracks, wheels or even train wheels on railroad tracks. Regular tanks with at least two prominent arm attachments mounted on their swivelling turrets are also considered. The trope is not exclusive to mechas either; some robots and even cyborgs have invoked this trope before as well.