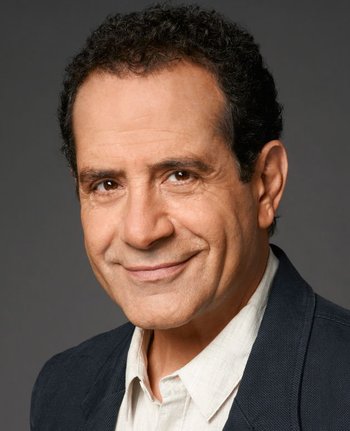 "I still think of myself as a stage actor. When I do film and television I try to implement what I was taught to do in theatre, to try to stretch into characters that are far from myself."
Advertisement:

Anthony Marcus Shalhoub (born October 9, 1953 in Green Bay, Wisconsin) is a Lebanese-American actor best known for his work as a character actor in film and television. Born in Green Bay, Wisconsin, Shalhoub's acting career started as an extra in a high school production of The King and I, and he instantly fell in love with acting. He later earned a bachelor's degree in drama from the University of Southern Maine, and a master's from the Yale School of Drama in 1980.

He continued in theater productions such as The Odd Couple and Conversations With My Father, as well as bit parts in movies and television, but in 1991 he found a wider audience when he joined the regular cast of Wings. Since then he has enjoyed a solid status as That Guy You Recognize But Can't Name in dozens of smaller film and television roles, though his pseudo-anonymity arguably ended when he took the starring role in Monk. He has been nominated for and won a wide range of awards for his work, and has even lent his vocal talents to a handful of video games.

Other shows with TV Tropes pages: