Tabletop Game / Over the Edge 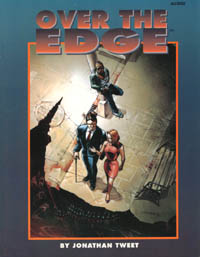 This game is a coded message. You will decode the message in your dreams and execute its instructions in the spaces between moments of will. Neither you nor I will ever know the contents of this message.
—Jonathan Tweet, on the credits page of the second edition
Advertisement:

The game is set on the mysterious Mediterranean island of Al Amarja, which is ruled by Monique D'Aubainne and various members of her extended family. The D'Aubainnes have most of the laws of the U.S.A. (or something like them) on the statute-books but basically only enforce them if you attempt to mess with the status quo, making Al Amarja effectively a Libertarian despotism. As a result, it is home to every conspiracy imaginable (no, seriously, one splat-book has a table to determine whether any given housecat is an alien and part of the huge Conspiracy of Cats) as well as a haven for all sorts of freaks and malcontents.

The native Al Amarjians ("'Marjians" or "Martians" in local slang) are a mongrel and polyglot population, given to self-expression largely (but not exclusively) in the form of drinking, drugs, public weirdness and violence. And they wear nooses instead of neckties.

The rule system used was released separately as the Wanton Role-Playing System (WaRP System) under an Open Source license; a few adventures for the WaRP System were published.

A third edition was released in early 2019, moving Al Amarja to the Atlantic Ocean (off the coast of Africa) and making many other changes to the setting, both large and small. It also changed the rule system to one built around rolling two dice (called "lots") and rerolling based on relative ability levels.

All editions provide examples of:

The first and second editions, and the card game, provide examples of:

The third edition provides examples of: