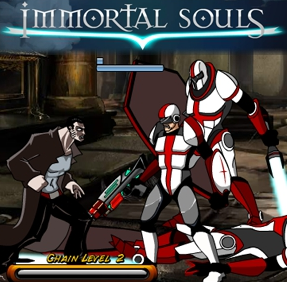 "This is New Haven, ground zero for a Secret War, the war between angels and demons. Our only hope lies in two vampires. One fights for revenge for the family that was taken from her. The other fights for redemption, seeking forgiveness he can never have. This is the battle between Heaven and Hell. This is the story of the Immortal Souls."
— The game's

Immortal Souls is a series of Flash games published in 2010 by indie developer Comic Book RPGs, best described as being like a combination of one-sided Puzzle Quest, Bejeweled, and a Linear Visual Novel, with a Gothic Horror setting.

The series features two "good" vampires, Raven and John Turner. Raven is a hunter against the shadow world, to get revenge on the creatures who killed her family. John, meanwhile, is a former street racer who was turned by a crazy powerful vampire called the Black Witch, and now spends his time trying to live a normal life as a nocturnal taxi driver.

On one side of them is the shadow world, full of all manner of nightmarish creatures; fellow vampires, zombies, ghosts, ghouls, werewolves, mutants, and other monsters, most of which are bent on killing anyone or thing that crosses their path. On the other side of them is the Templars, technologically-advanced human Church Militants bent on destroying all shadow creatures, even "good" ones like John and Raven. In between is more normal humans, unaware of their status as prey caught in the middle. Including John's Love Interest Allison Donovan, who works as his dispatcher... and has a brother in a coma that she doesn't know John caused. And of course there are plenty of troublemaking humans as well. Finally, watching over all this is the shadowy Isis Corporation that Raven works for, dedicated to keeping a balance between the angels and demons, the normal world and the shadow world.

Gameplay is a combination of dialogue scenes done in comic book art style with Character Portraits and Speech Bubbles, and battles against enemies. Each enemy has "armor" of a certain color protecting them, and the player has to match colored tiles in chains of one or more to deal one of four types of attacks (Melee, Vampire, Guns, and Martial) to break the matching armor and deal damage. There are also various special attacks the player can use either by earning Tech Points in battle, or by purchasing special powerups with gold trophies you earn by beating battles under a certain number of turns. Finally, after each battle you get to buy equipment to give stat boosts, and level up to earn skill points. Whew.

There are two games in the series, a full downloadable game for purchase called Immortal Souls: John Turner #1

, both of which feature John as the main character. There were supposed to be more games released, including one called Immortal Souls: Codename: Raven #1

(starring Raven), as well as a webcomic... but the developer seems to have closed up shop, as the company's website is gone, and the company's social media accounts haven't been updated in ages, meaning it's most likely an Orphaned Series.