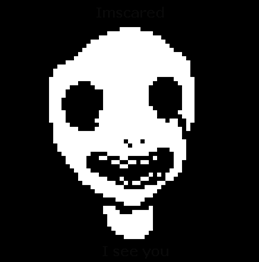 Hello! Do You know my name? I made something for You.
"The game will try to deceive you as many times as it can. In case something goes wrong, feel free to check the folder in order to report any error.
I'm extremely sorry. I didn't really want to do that."

"Forgive me."
—Some of the game's introductory text
Advertisement:

in October 2012. At first, this game appears to be an experimental project made by a novice at best. The novella-length introductory text includes a profuse apology for any errors or glitches that will inevitably appear in the game. The game's graphics themselves look like they were either drawn in Microsoft Paint or otherwise came right out of a Windows 95 screensaver. During the first few minutes of gameplay, the player encounters half-hearted scares such as pixelated blood and some creepy music that doesn't even continue playing for more than a minute. And then the game abruptly crashes when a monster ambushes the player. Well, this game definitely lives up to its title of "pixelated nightmare" all right...

But the game's introductory text also mentioned that outside files would appear once the game glitches occurred. The player opens these up, and the text file mentions something about entities becoming data. It seems that one of the game's glitches has taken a life of its own, and wants the player to continue the game...

This game can be downloaded here

, if you dare to interact with the sentient game glitch yourself. A sequel is in the makings as well, information about that as well as instructions to download the demo found here

. A new version of the game

was released on Steam on January 31, 2016. For the 10th year anniversary, a new version of the game was released October 12, 2022, adding modern settings and mixing the content from previous versions.

Because this is a relatively unknown horror game, expect many spoilers ahead. Remember, players will have the best possible horror experience if they cannot anticipate any of the frightening events that await them.

Congratulations. You made it to the end. But you can't escape from here. Stay with me. I will always be here. Looking at you.