Video Game / I Have No Mouth and I Must Scream 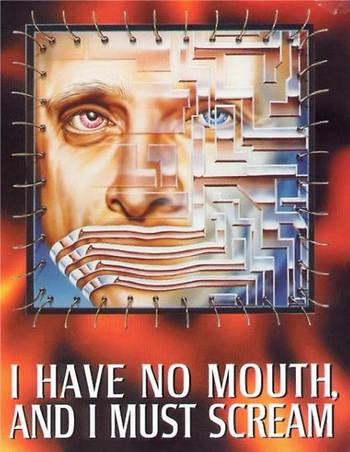 "Hate. Let me come to tell you how much I've come to hate you since I began to live. There are 387.44 million miles of printed circuits in wafer thin layers that fill my complex. If the word "HATE" was engraved on each nano-angstrom of those hundreds of millions of miles it would not equal one one-BILLIONTH of the hate I feel for humans at this micro-instant for you. Hate. HATE!"
Advertisement:

I Have No Mouth, and I Must Scream is an Adventure Game developed by The Dreamers Guild, and published by Cyberdreams. It was released on October 31, 1995.

An adaptation of Harlan Ellison's story of the same name, the game is also notable for including the author as a designer. The game is divided into a separate scenario for each of the characters and delves deeper into their backstories than the original work does. It is considered to be just as nightmarish as the story; one of Ellison's goals was to create a game that players could not possibly "win."

Notable not only for the fact that Ellison had a heavy hand in the writing and development of the game, but he himself actually served as the voice actor for the supercomputer AM, marking one of the very few acting credits on his resume.

The game contains Examples Of: