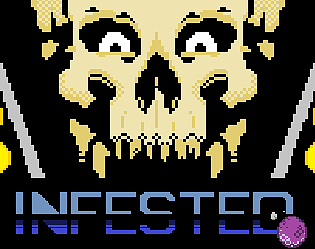 Infested is an Adventure Game for computers running Windows released in 2016.

You play as an unnamed crew member on the 5-A ship. You wake up in the stasis pod, remembering Commander Lakmir telling you to rest and vague memories of screaming, as well as feeling sick. Once you wake up and leave the room, you realise that you were on an away mission and fell ill, plus something has likely came back to the ship from there. You must first cure the infection, then find out more about the situation and eventually leave the ship, watching out for dangerous creatures ready to kill you.

The game is first-person, with a graphics window on the top-left, the inventory on the top-right, and the text/interface at the bottom. You can MOVE from screen to screen, EXAM. things, TAKE whatever might be useful, USE items, OPEN doors, and there's a SELF option which is used if you need to wear something for instance. The game can be saved and loaded at almost any time. There's a high number of ways to die, but it's not much of a consequence (aside from a grisly death description), as you are just moved back to the previous room.

The game is based on the MacVenture series by ICOM Simulations, with an atmosphere that feels similar to Shadowgate and Uninvited. The game is also the first in a series NES MacVenture-styled games, with the second game being Spectacle and the upcoming third game being Themeire.