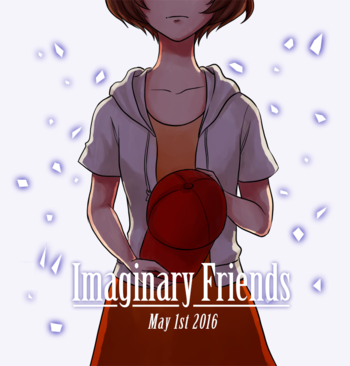 Imaginary Friends is a RPG Maker horror game made by Mannytsu. It started development in 2013 and was released in May 1st 2016.

It tells the story of a 14 year old girl named Hailey. Her mother wants her to go outside and hang out with her friends. But Hailey doesn't have any friends.

Because her mother insists in her getting outside at least once, she goes the market with her mom and her little brother. Everything is all normal, until she walks into a different section and when she returns, her family is gone. She then goes back, but everyone seems to be acting weird, then Everyone is suddenly gone.

She wonders if her mother and brother went home already, at the front of the exit door, she sees a mysterious boy with a red cap. He says some weird stuff, and goes away. She shrugs it off and goes to her house.

And then... everything goes downhill from now on.

The game is free and can be downloaded here

Be aware that this game is very story based, with focuses only on puzzles and interaction with characters, so almost every single event in the game could be considered a spoiler. So you may want to play the game before reading