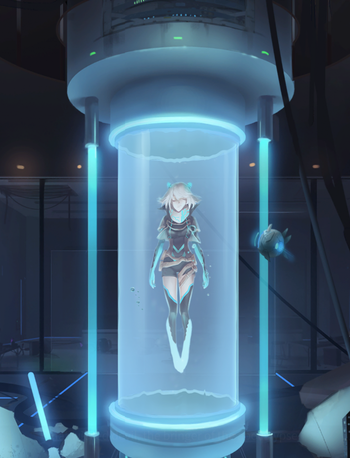 Now Is the Time For You to Discover the Truth.
Advertisement:

_iCEY._ is a 2D side-scrolling, Hack and Slash, Action Game, with light RPG Elements, made by Chinese indie developer Shanghai FantaBlade, and published in 2016 by X.D. Network Inc, first for the PC and later for both home consoles and mobile devices.

Described as Mega Man Zero, meets Pony Island, meets The Stanley Parable, the game takes place in a post-apocalyptic world overrun by machines. The story follows the titular character Icey as she fights to take down "Judas", a transhuman cult leader and bringer of the apocalypse, through a variety of devastated post-apocalyptic landscapes, all the while "guided" by the voice of an unseen narrator and some mysterious arrows floating in the air. But is there more to this story than the narrator wants to let on?

Similarly to The Stanley Parable, Icey will have the ability to follow the orders of the Narrator or defy him at various points, and doing the latter can potentially lead to secret paths containing various fourth-wall breaking endings and scenarios. The more endings are uncovered, the more Icey will learn about the backstory of both her world and the In-Universe game itself.