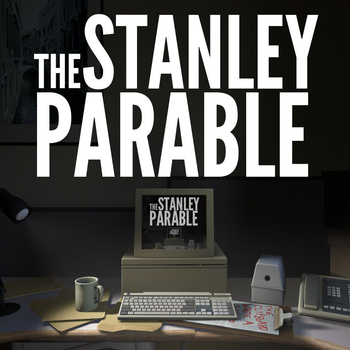 Having clicked on a link to this article, be it from another article or from a search results page, the reader began to read the description.

The Stanley Parable is a 2011 Environmental Narrative Game, which began life as a modification of Valve Software's Source engine. It is now also a standalone release on Steam (and later, Humble Bundle), colloquially known as the "HD Remix", which was released on October 17, 2013. While the standalone release expands on the formula, the idea behind both releases is largely the same.

The game follows the story of a man named Stanley, who spends his days pushing buttons as commanded by his boss, who issues orders to his workers via a system of monitors. However, one day Stanley notices that he hasn't been given any orders in hours. What follows are events that change his life forever.

Without giving too much away (because it's a comedy game at its core and we don't want to spoil the jokes), the game is an interesting exploration of interactivity that serves as a send-up of, and commentary on, the nature of choice and predestination in video games, while not-so-indirectly also commenting on, and questioning, our own real-life existence. The Narrator is the sort of character you love to hate, like GLaDOS from the Portal games, and his light-hearted but sometimes dark dialogue makes the game not just thought-provoking but also fun to play. You can download the original Source mod here,

and buy the HD Remake from Humble Bundle

The lead designer went on to make the Spiritual Successor The Beginner's Guide, while the co-designer released Dr. Langeskov, The Tiger, and The Terribly Cursed Emerald: A Whirlwind Heist and then teamed up with Justin Roiland to create Accounting.

In December 2018, it was announced that the game would be receiving another Updated Re-release entitled The Stanley Parable: Ultra Deluxe, featuring more choices and endings; within the game itself, it is also styled as The Stanley Parable 2 (among other things). This version released on PC and consoles on April 27th, 2022.

It is prudent that you play the game before you read this page, as there are unmarked spoilers in this article. You have a choice in the matter, of course. Doesn't really matter though, in the end. The tropes are still here.

The reader then continued to scroll down, reading the following tropes:

Wait, you...finished reading? How did you do that?