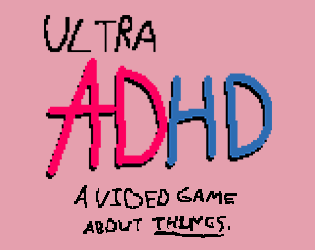 "We require your shooty-shooty-bang-bang services. Meet us at the forest."
— Motherland

Ultra ADHD is a Unity game released in October 2016 by Alon "DancingEngie" Karmi. An evil God has brought forth the END TIMES - the apocalypse. The few humans who are left alive hide behind walls, ruled with an iron fist. An ancient prophecy tells of a legendary hero, who defeated God long ago, brought peace and prosperity to the people, and then mysteriously vanished. You are the hero, who is sent on a grand adventure by two siblings, Motherland and Fatherland, to bring down the evil god and free the people from his reign. Hilarity Ensues.

A self-described "game about things", Ultra ADHD is a 2.5D First-Person Shooter , featuring mouse-drawn pixel art and French noise rock. It takes about 20-40 minutes to complete, and it's best to go into it blind to experience its nonsensical plot and surprises.

The game is offered for free/pay-what-you-want on itch.io