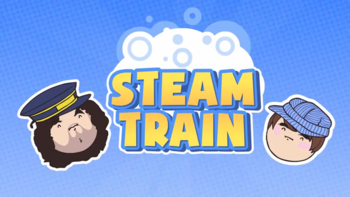 Goddammit, Ross.
"He bought too many games!"
"Now we gotta play them all."
"So all aboard the STEAM TRAIN!"
"Choo-choo!"
Advertisement:

Steam Train was a Web Video comedy show about video games. The show is a Spin-Off of Game Grumps, and is hosted on the same channel. The format is similar to its parent show, as Ross of Rubber Ninja Animation plays games with others. Initially this was only Danny of Ninja Sex Party and occasional visits from Arin if Danny was unavailable. The format later changed to changed to include the entire Game Grumps family, with Danny and Arin sometimes not appearing at all in favor of Barry, the channel's editor, and Suzy, another YouTuber and Arin's wife, who join Ross and joke around.

Unlike Game Grumps, however, the show focuses on computer games rather than console games. Special episodes called Steam Rolled focus on four-player PC games, although for a brief period of time the series also included console games. The series went into indefinite hiatus in 2017 due to Ross focusing more on his animation career, and the Game Grumps have since since begun playing PC games.