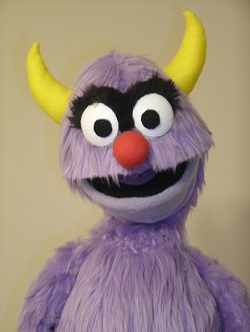 The re-created version of the monster character made by Joseph Scarbrough. 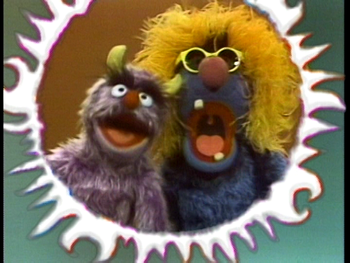 The original version of Steve D' Monster (next to Little Chrissy) seen on the Frazzle song on Sesame Street.
Steve D’Monster is a lavender monster puppet, created and performed by Joseph Scarbrough. The character was first originated in Sesame Street in a few songs and sketches including "Fur", "Frazzle" and the original version of "I Want a Monster to Be My Friend". The monster was made from a lavender anything pattern by Muppeteers decades ago. The puppet remake by Joseph was first emerged locally in Knoxville, Tennessee, appearing on local PBS affiliate during pledge drives in August 2004; Steve slowly grew in popularity among local viewers, as he continued to appear on local pledge drives, up until August 2005, when they were no longer televised.
Advertisement:

Afterwards, Steve later made a much wider debut in December 2007, when he began appearing in a series of videos produced exclusively for YouTube by Joseph Scarbrough Productions. The series of videos is a showcase of Steve’s wild and crazy antics, usually resulting in some kind of a backfire that may slightly dampen his spirit, if only temporarily. Originally, the Steve D’Monster videos were a one man (or one monster) show, but later in the series’ run, new characters were developed to be included in the roster, including Bethany Crystal (Steve’s gal pal sidekick), and The Squirrely Squirrels (a trio of squirrels who love to pester Steve and Bethany to no end). Although the new characters’ appearances within the YouTube series have been limited at best, due to a lack of additional puppeteers, the characters are otherwise featured heavily in-universe through other media, including comics, artwork, as well as future projects that are presently in the works.

Although the regular series of videos lasted from December 2007 to May 2013 for 52 episodes note There was a two-year hiatus between 2009 and 2011, while Scarbrough was trying to get bigger projects off the ground, Steve still continues to appear in a number of one-off, stand-alone shorts and specials on Scarbrough's YouTube channel

You can see the videos here