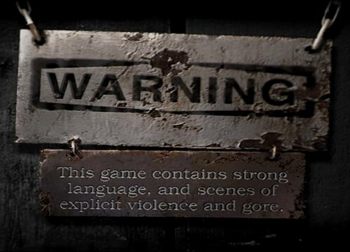 WARNING: The following page may ruin your life. Reader discretion is advised.

Sometimes, producers or distributors feel the need to warn the viewers of what they are about to see. This serves to help viewers who might not like what they're about to see stop looking at it before things get unpleasant; for others, it's an invitation to watch.

Content warnings have been common in media for decades: public television's "viewer discretion is advised," radio and television journalism's "some of what you're about to hear/see is graphic," and various music, TV and film labeling.

Content warnings are often given in conjunction with a ratings system as an explanation of why a given work has the rating it does. In most cases, these are selected from a list of stock warnings (e.g. "strong language", "violence", "imitable behavior", or the very general "viewer discretion advised") — these don't really provide much of an explanation. A warning specific to the work shows that the work itself is fairly controversial or otherwise unusual.

Like most other content rating systems, this only serves as an aid to the viewer's decision of whether or not to keep watching; what viewers actually decide is up to them. This hasn't stopped Moral Guardians from insisting on content warnings as a sort of deterrent from imitating harmful things, not realizing that most viewers tend to ignore such warnings or even consider them an indicator of the really good stuff. Works which try to capitalize on the latter phenomenon are often Rated M for Money.

See also Media Classifications and Trigger, as well as Our Lawyers Advised This Trope, Don't Try This at Home, Do Not Attempt, This Is a Work of Fiction, and NSFW. Compare R-Rated Opening.